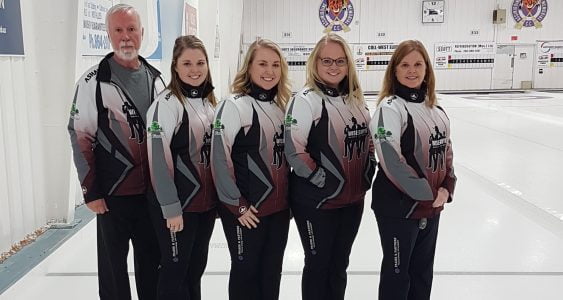 Team Spencer is a family team made up of dedicated individuals, with a positive attitude, a history of championships and a determination to dominate the curling tour to become the next Team Manitoba. Team Spencer begins this season on a high as they have already earned a berth into the upcoming Provincial Scotties Tournament of Hearts held in Killarney, Manitoba, January 2018.

Barb has been curling competitively for over 30 years and has a long list of curling accomplishments. She is a three time Scotties Provincial Champion, one time Manitoba Mixed Champion and one time Junior Canadian Champion. Barb was also inducted into the Manitoba Curling Hall of Fame in 2009. Barb has competed in many Scotties Manitoba Provincial Championships coming close to becoming a Provincial Champ yet another time. She was semi-finalist back to back years in 2014 and 2015 and a finalist in 2013. She was awarded All Star Skip at her Manitoba Scotties in 2012 where her team finished third overall. Barb also participated in the 2013 Olympic Pre-Trials. This mother of four is also a part time EAL teacher at Tyndall Park Elementary School.

Katie has been curling for 19 years and has been playing third for her mom, Barb since 2013. In her junior years, Katie was a one-time CIS/CCA University Curling Manitoba Champion and competed at University Nationals. She also finished third two years in a row at the Manitoba Junior Provincial Championships. Right out of juniors, Katie showed she could compete with the best. Playing third for her mom, she was a Manitoba Scotties Provincial finalist and attended the Olympic Pre-Trials in 2013. She was a semi-finalist back to back years in 2014 and 2015 at the Manitoba Scotties Provincial Championships where she also was awarded All Star Third in 2014. Katie is a Chartered Professional Accountant working full-time at Pricewaterhouse Coopers.

Holly is not new to playing the game with family. In juniors, Holly played third for sister, Katie. Playing the game from a young age, Holly had six appearances at the Manitoba Junior Provincial Championships where she finished third back to back years in 2011 and 2012. Holly joined the Barb Spencer rink on the women’s circuit in 2014/2015 season where the team finished third at the Manitoba Scotties Provincial Championships. Holly works as a Sales Associate for Wise Guys Auto.

If the last names don’t give it away, this is an all family team. Ally is the youngest daughter of Barb’s and just joined the team last year. Although she is new to the team, she is not new to the game. She has been curling herself for 14 years but also attended all of her older sisters and mom’s curling events over the years. In fact, she was on the team as the fifth player at the Manitoba Scotties in 2015 and 2016. She also has 4 of her own appearances at the Junior Provincial Championships. Ally is currently a student in education at the University of Winnipeg where she plans to follow in her mom’s footsteps of becoming a teacher.

Gerry has a Ph. D from the University of Waterloo. He was a faculty member in the Department of Psychology at the University of Manitoba until he retired. He has received multiple teaching awards, and is a nationally certified coach in the sports of curling and softball.

Final Update for the Season
We started off well in the provincial Scotties….going 4 – 0 in our first games. Then we struggled and lost the last 3. We played well and showed a lot of improvement from the beginning of the season. We’re off to train as we plan to play together again next season.

In the second half of the season, team Spencer won the 2017 Sunova classic and then went on to qualify in the MCT championship. They are now practicing and working hard to prepare for the upcoming Scottie’s Provincial championship held January 9-14th in Killarney, Manitoba.

The team has played in 5 events so far this year. Gerry Sande joined as coach after the first two events. In the last 3 events the team qualified for the playoffs and made it to the final of the Atkins Curling Classic. The team is scheduled to play in the DeKalb Superspiel in Morris starting Nov 14, followed by the Sunova Bonspiel a couple of weeks later. They have already secured their berth in the Provincial Championships in January – playing well in the championships is the goal.